Living, inhabiting, getting around: how to build tomorrow's city?

On Tuesday, November 23, the "Building tomorrow's city" conference brought together four key speakers to discuss themes related to this issue. The city of tomorrow is a project carried out not only by builders and lessors, but also by all citizens wishing to live in it. 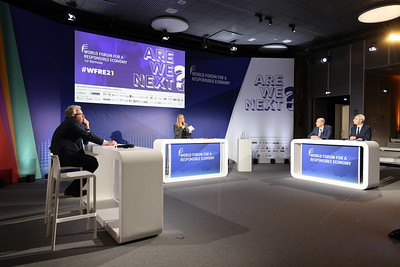 "What is the city of tomorrow?" questions Frédérique Seels, in charge of moderating the conference. As CD2E's director, a gas pedal of eco-transition, she focuses on both the material and immaterial aspects of future urbanism. And when it comes to construction, it's all about materials! In order to make the city sustainable, it is necessary to develop it in an ecological way, but also be attentive to the needs of the people who will live there. For this, local actors play an essential role. Frédérique Seels specifies that collecting the needs of the users is part of CD2E's mission.

Building on a solid foundation: optimism as a supporting wall

Jérémy Estrader, Habitat en Région's Deputy Managing Director, was invited to express his vision of construction. For landlords, building means housing people. He is proud of the Habitat group's activity in this field: "Our group has 3300 employees! " A success that relies in particular on the savings banks with which it is affiliated. For him, the city of tomorrow is based on a strategic project that is already underway. The group plans to build 1,500 new homes starting in January 2022. To do so responsibly, a certain percentage of bio-sourced construction materials must be used. Jérémy Estrader has also announced the end of properties classified as F or G on the DPE (Diagnostic de performance énergétique), in accordance with the law, because they are too energy intensive. A measure that augurs a revival of purchasing power according to him.

What would cities be without their citizens? Jérémy Estrader never fails to mention Axentia, a social housing company. "We accompany people from accommodation to autonomy," he says. Philippe Rémignon, chairman of the board of Vilogia, a social landlord, builder and developer, spoke of the social issues involved in urban construction: "Social landlords are developers," he said. His company is also committed to eliminating E-rated properties, notably through rehabilitation, but there' s no intention of stopping there. "If we want to make the city inclusive, we must also provide services," explains the chairman of the board. This means facilitating access to services such as shops and cultural venues. This is a point that Jeremy Estrader insists on, emphasizing the importance of intergenerational diversity in the development of these services so as not to isolate the elderly, who can lose their autonomy and suffer from this isolation.

"Do we still want to build in France?"

Pascal Boulanger, president of the Federation of Real Estate Developers, has doubts about the possibility of creating new buildings and housing. "French society is lost, and the State is showing a schizophrenia. Many mayors, on the right and on the left, refuse building permits. We continue to lose supply every month, we are reaching a crisis that we never knew before." He asks very directly, "Do we still want to build in France?" He draws on his experience, noting that town halls massively refuse building permits. He explains that the consultation required to obtain these permits is very long, and that the meetings around these questions are "games lost in advance". The consequence: a surge in real estate prices, both for new buildings and for older properties.

This state of affairs augurs a real paradigm shift for developers.

Living in the city, a complete program

Sustainable urban planning also means fighting against the ghettoization of the underprivileged classes. When asked what he thinks of the obligation of social housing quottas, Pascal Boulanger does not hide his approval: "This allows for the opening of housing in middle-class neighborhoods, thus bringing social diversity. I say: long live the SRU law!

A point that Carlos Moreno wholeheartedly approves . Freshly arrived from Aix-en-Provence, the university professor is at the origin of the concept of the "quarter-hour city". "Seventy percent of the working population rises at the same time, only to converge on less than 10% of the territory. This creates a funnel. We have to get out of the obligatory long-distance mobility, so that the long distances are chosen. We need to get out of the funnel." Carlos Moreno contrasts the city of the quarter hour with "the territory of the half hour," emphasizing the distance of housing around urban centers. According to him, the city of tomorrow must allow the population to be happy. And to be happy, it is necessary to create an emotional link with the urban space, what he calls "topophilia". He dreads more than anything else the "bobo" districts: "Gentrification is the enemy!" His key words are "ecology", "solidarity", and "proximity".

Carlos Moreno affirms and repeats, "it is difficult to house, but not to live", and approves unreservedly the remarks of the three other speakers on the social stakes involved in urban development. Tomorrow's housing is in good hands.