Dale Dougherty is the founder of Make: Community, Maker Faire and Make: Magazine. He is himself a typical figure of the makers: he “grows his own food”, “likes to cook” and “makes wine and beer”.

For Dale Dougherty, “we are all makers”. Makers are people who create tangible things. Their innovative spirit is limitless. Makers’ attitude is guided by passion and curiosity: they create things because they feel excited about it, not because of lucrative interest. 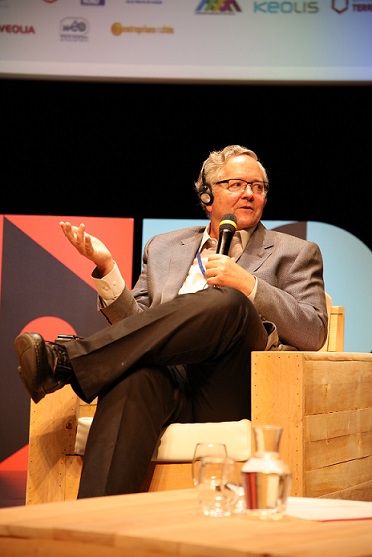 In that sense, makers are grown-ups who have kept their childish spirit. Their toys are no longer dolls or cars but tools, materials and new technologies. Instead of sandboxes, makers play in fab labs or workshops. As Dale Dougherty puts it: “Makers live in a world of their own making.” He illustrated his statement with the example of Damon McMillan, a family man who challenged himself to build a solar and autonomous boat. It took him 30 months but eventually, the boat sailed from California to Hawaii. This technology cannot be compared to Bertrand Piccard’s autonomous plane, but McMillan had no practical and monetary support.

Projects such as McMillan’s autonomous boat are presented in Maker Faires. Two hundred Maker Faires take place across the globe in cities like New York, San Francisco or Paris. Those events are a way for the public to discover new creations and feel inspired and amazed.

Indeed, makers' creation are much more than just tangible objects. They represent the capability for makers to bring changes in their community. Dale Dougherty stated: “Maker movement is intended to empower people to do things and when they do so, they have an influence on themselves and on the world around them. They may not realize it, but they create culture around them.” Not only do makers make valuable creations but they also make society.

Therefore, everyone should be a maker! But not all individuals believe that they have the means and the knowledge to create what they want. To those, Dale Dougherty would answer: “Just start doing something, you have the means, you have the ability(…) Use the simplest materials that are around you(….) Look for other people doing it(….) And I think, you will find some inspiration once you start to meet other people. They will help you learn and shape your direction. Practically, you can find makers at fab labs and workshops, go there and find out what people are doing there. The important things is: start inside yourself, you are good enough to do it, you don’t need to be trained for four years at school(…), you can do something right away.“

So, what will you be creating?