Sweden’s Favorite Burgers for the People and the Nature!

Face to face with Kaj Török 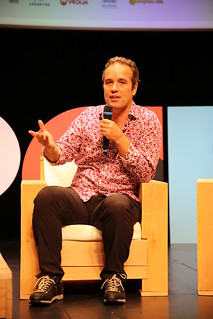 Founded in 1968, Max Burgers is the world’s first climate-positive fast food chain. For 14 years in a row Max has been chosen as the most popular burger chain in Sweden. The reason is quality and taste. In fact, in 1991 it was the first burger chain to outcompete the giant McDonald’s in its home country. Kaj Török is the CRO (Chief Reputation Officer) and CSO (Chief Sustainability Officer) of Max Burgers since 2016. He also presented himself as a caring father very concerned for his children’s future.

During his intervention, Kaj described the way his company managed to become climate-positive. The first important step is to look in detail into its production methods and measure its consumption. That will allow the company to firstly reduce its consumption and then later establish methods to give back more to nature than it has taken from it. This way, Max Burgers became a 110% climate-positive company and it only costed them 0.4% of its total turnover. After the inspiring keynote he gave us, Mr. Török took some time to answer several of my questions in an interview.

What motivated you to work in the fastfood and burger industry?

I was an advisor for Max Burgers for 10 years before entering the company. I truly supported their values and carried them. I felt like I could have a real impact on our world.

You proved that it is possible to be climate-positive, Max Burgers did it. Do you believe that today’s biggest companies can also successfully adopt this model?

I am absolutely convinced that all companies, including the most major ones can do it and they will do it sooner or later. The Paris Agreements are all about this and all businesses should feel concerned and take action now. We shouldn’t wait 2050 to act, important steps are to be taken as soon as possible.

Companies are the best structures to find and create solutions in our societies.

You have now been very big in Sweden for several decades. Is it in your plans to expand your burger chain model throughout the world?

Of course Max Burgers, as any company, must be ambitious. I would ideally want Max to be the world’s best burger chain. Not the biggest one, but the best one. Quality and innovation is what we want to build ourselves a name on.

Max Burgers is currently expanding in Denmark and Poland, and I hope to soon be able to say we opened a franchise in France!

Max Burgers achieved a fantastic goal by becoming climate-positive (110%), but will the company push its model even further and go beyond 110?

As a climate-positive business, it is tough to be fully satisfied and decide to stop. We aren’t finished trying to find and develop new ways to be climate-positive. Today Max contributes by planting trees but we might find better alternative ways tomorrow.

Even though our company runs on burgers (meat), there will be less meat consumption in the future for the profit of higher quality and more eco-friendly beef.

Our priority is now to try and introduce the taste of plants to our clients and try to show that veggie burgers can be as tasty and delicious as beef-based burgers. We want to contribute to the very needed transition in our eating habits.

If Max Burgers managed to do it, why couldn’t other companies do it as well?