What if insects were a solution for urban food self-sufficiency?

Eating insects is a supply solution that limits the use of resources and allows the implementation of a circular economy. It requires less space and less water in production. Moreover, it produces less harmful gases then meat and provides a high protein diet.

According to the UN, having protein-rich food will be necessary by 2050. Edible insects will play a crucial role for making cities self-sufficient in food production. In France, a 2017 study carried out by UTOPIES showed that on average, out of 100 urban areas studied, 98% of food is composed of "imported" agricultural products, while at the same time 97% of local agricultural products are "exported".

The consequences in terms of environmental impact are strong due to the intensity of road transport, which sometimes imports and exports the same food. In terms of social cohesion too, through the loss of connection between those who produce and those who consume on the same territory. Almost two thirds of the urban areas studied have sufficient "agricultural assets", to be theoretically more than 50% autonomous. However, not all urban areas have the same potential... Some must think about the development of new forms of urban or semi-urban agriculture and new local agricultural products. 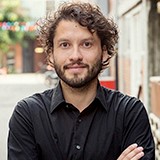 Jakob LEWIN RUKOV, guest of the 12th World Forum, understood these issues only too well. Founder of BUGGING DENMARK, the Denmark's first farm of crickets and edible insects. He is working on an innovative solution to replace meat in urban food.

Located in the northwestern part of Copenhagen, it is currently the only urban farm of Denmark.

Insect based juice: the new invention to replace meat

With his farm, Jakob LEWIN RUKOV wants to integrate insects into the Danish food chain by presenting them as valuable food other than pests. The company therefore decided to improve the cricket image by inventing an insect-based juice drink!

The recipe is very simple, the mix of pressed apple juice, ginger and blanched fat crickets as a magical ingredient gives birth to a healthy juice, rich in protein and benefit while guaranteeing the preservation of flavors.

The company is based on a circular business model. Insect production in cities is easy and accessible to the consumer because insects require very little space (3 kg product/m2) and the city is full of hidden resources that can be used as food. 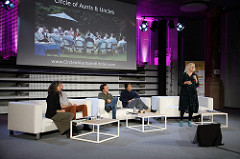 The financial support from the Danish public authorities* highlights the innovative scope of this project and its utility for the public. This will inspire other initiatives around the world.

*Ministry of Environment and Food of Denmark

Like Jakob LEWIN RUKOV, these speakers have made food autonomy of cities their priority and are transforming society at their level, in their own way. Discover their testimony in video